Over the past winter,  The Mary Baker Eddy Library presented a series of programs called “Paths of Peace in Crisis.” The final segment featured Chaplain (Lt. Col.) (Ret.) Diana James and Chaplain (Col.) (Ret.) Janet Horton. They were the third and fourth women ever to serve in the United States Army military ministry.

When James joined the Army’s 1,300 male chaplains, there were only three women on the force. At that time, the women didn’t seem to have a place or a purpose, but through pioneers like James and Horton, today a woman’s place at the chaplain’s table is secure. The third panelist, (2nd Lt. USAF) Samantha Larson, isn’t yet on active duty, but she acknowledged that her way had been prepared by the women who had gone before her. 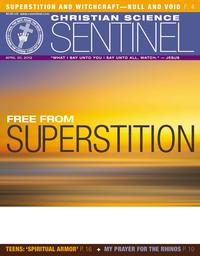