Some time ago when I turned on the TV, I was greeted by an advertisement recommending that men should have themselves tested for prostate cancer. It predicted that 18,000 Australian men would be diagnosed with prostate cancer and 3,000 would die in the next twelve months.

From my study of Christian Science, I’ve seen that these kinds of pronouncements, while often well-intentioned, plant the seeds of fear in thought. This fear leads people to accept the predictions of disease, and sometimes to become ill with it themselves.

Donald A. Wilson is a Christian Science practitioner in Rockhampton, Queensland, Australia. 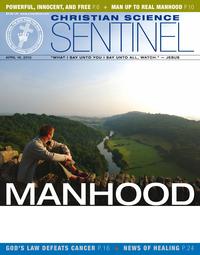