Speaking of success, I recently finished reading an intriguing biography of Charles Dickens. He did what he loved and he was good at it, overcoming great odds to become one of the most sought-after and influential writers of his day—a legacy that has continued. His writing grew out of his journalistic background. He was honest with his readers, giving them a gritty portrayal of the often harsh realities of Victorian England as no other writer before him had done. Dickens brought social injustices to the surface and influenced social reforms. His writing wasn’t just frivolity; he wrote with a moral purpose, with the intent that his novels—by showcasing the best and worst in human character—would change the actions and attitudes of his readers.

Barbara Vining, who wrote our lead this week, comments, “I find it helpful when reading a biography to identify exceptional talents and qualities as evidence of God working in the individual, rather than to focus on the person’s human personality” (see p. 6, and don’t miss her list of qualities). There’s certainly something to be said for honesty and its relation to success. When you’re honest with yourself and others, you not only know what you have to offer, but you do it without thought of personal gain. 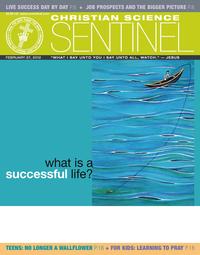