On a Friday in June 2011, I had an odd feeling in my right hand. The thought came to call a Christian Science practitioner for metaphysical treatment, so I did. Later I picked up the local newspaper to read, but it slipped from my hand to the floor. I tried three or four times to pick it up and then realized that my right hand was completely useless. I called the practitioner back for more prayerful support.

Then I went to the Bible. In Genesis we read, “God created man in his own image, in the image of God created he him” (1:27). I thought about the infinity of God and affirmed that since God is spiritual, the man He made is spiritual. 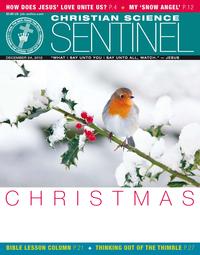