First published in the online Indonesian Herald of Christian Science

Some time ago, one of my wrists suddenly became red and swollen. It hurt every time I moved it. A colleague, who was not a student of Christian Science, told me that it was because the lubricating fluid in my wrist had become dry, which he said often happens as we grow older.

This friend, who was much younger than I, added that she had had the same problem with her knees. I remembered that a few months before, she had been wearing spandex on her knees and had been walking with a cane. She told me she got her medication from the United States through a relative who lived there because it was less expensive than in Jakarta. 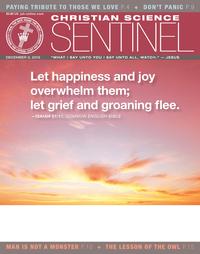