Australian flood: not too late to pray

Snake-infested, muddy water has covered a vast area of southern and central Queensland, Australia, during the recent unprecedented, multi-billion-dollar flood. Described as Biblical in proportion, this giant mass of water has brought devastation to thousands of people. Houses, cars, and homesteads were submerged. Personal possessions and precious memories have been destroyed. And for some people it has been the second flood in ten months.

The region’s economy and jobs have also been seriously affected. Damaged roads, bridges, and rail lines, and the closure of a major regional airport, have hampered the movement of freight and people. Forty coal mines were inundated, leaving over 70 coal ships lying idle off the coast.

Beverly Goldsmith is a practitioner and teacher of Christian Science who lives in Brisbane, Queensland, Australia.&nbsp; 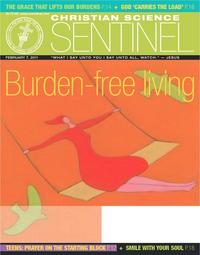