Do you like adventures? Most people do, and love to talk about them afterward!

A few weeks ago I found myself on the back of a donkey climbing a steep path up a cliff on an island in Greece. It was an adventure for me, not only because I’d never done anything like that before, but because my donkey at first wasn’t quite as cooperative as I’d expected. He kept making sudden quick jumps forward, always trying to be first by pushing his way past other donkeys on the trail. And I wasn’t able to stop him. Maybe it was because I didn’t speak any Greek! Anyway, I held on as tightly as I could and started talking to him (in English) telling him he was God’s good and obedient donkey. I was sure that although I didn’t seem to be in charge, God certainly was. Soon I noticed that my donkey was beginning to respond to some commands his Greek owner was shouting from behind. He slowed down, and I was able to relax and enjoy the beautiful views. 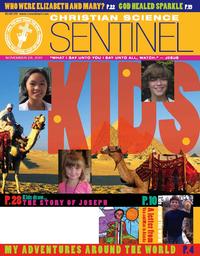