THE CENTRAL IDEA of this Bible Lesson, titled "Man," is from Psalms 115:15: "Ye are blessed of the Lord which made heaven and earth" (Golden Text). Throughout the Bible, God's blessing carries its own efficacy when it is pronounced on nations or on individuals, bestowing divine favor and benefits. The Hebrew Scriptures carefully record many blessings by God on people and their communities, as well as on the land and its creatures. The last four verse of this Lesson's Responsive Reading include such blessings. In return, people give thanks by blessing God for His goodness, and ask God's blessing on themselves and others.

In Section II, Jabez petitions God for blessing (I Chron. 4:10, citation 8). He is mentioned as part of a genealogical list for ancient Judah, and is commended as a spiritual success story. He gets special attention from the Chronicler because he asks for and receives God's blessing. When Jabez petitions God to "enlarge [his] coast," he is asking God to enlarge the territory where he lives. 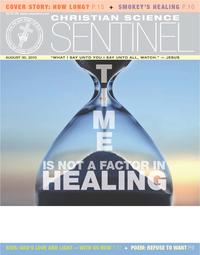