ABOUT FOUR and a half years ago, I was led to a new job through prayer. After just a few months, I was asked to begin working with an individual who, I was warned, had a difficult personality. I found common ground with him, and we worked well together for a while. But at some point in the next year his attitude toward me changed, and he became increasingly verbally abusive. In moments of anger, he would even threaten to quit and leave the burden of work for me to accomplish.

I prayed all the while through this experience with the help of a Christian Science practitioner. The situation at work seemed to go in cycles. It would improve, and then the verbal abuse would start again. This man was holding on to anger and resentment toward some individuals in the company whom he saw as enemies, and it seemed to be affecting his emotional and physical health. He seemed incapable of controlling his anger, and instead would take his emotions out on me and others. Often, he would leave work in the middle of the day, telling me he felt ill; he would get so worked up that he couldn't recover from those angry outbursts. 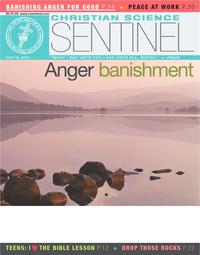