I woke up one morning in mid-November 2009 with all the symptoms of flu. There had been a lot of talk at that time of an epidemic of swine flu, and colleagues at my work were getting sick. One woman had announced the day before that she'd been told by her doctor that she had swine flu and had to go home. Everyone conjectured as to what rooms she had been in and advised each other to avoid touching certain door handles.

I couldn't think clearly. Whenever I feel something is not right in my life or my body, my instinct is to turn away from the material evidence to prayer, but in this case it felt like such a chore to do so. I just wanted to sleep, but I resisted because I knew that would just postpone dealing with the underlying problem, which I was aware from experience was mental, not material. 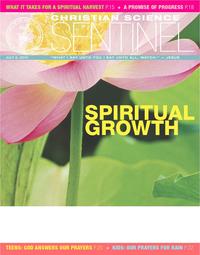