IT'S ALL RIGHT TO EXPECT MIRACLES

THIS WEEK'S BIBLE LESSON, "Is the Universe, Including Man, Evolved by Atomic Force?" challenges us to reconsider commonly accepted theories that start with matter as the basis of the universe. According to the Bible, God "spoke, and it came to be; he commanded, and it stood firm" (Ps. 33:9, Responsive Reading, English Standard Version). The Lesson shows how the lives of Moses, Joshua, Jehoshaphat, and Jesus contradict empirical evidence supporting material law, and confirm that spiritual ideas evolve (unfold) in response to God's commands, and are obedient to Mind (see Science and Health, p. 295, citation 1).

God's first command to the children of Israel in the wilderness was "Thou shalt have no other gods before me" (Ex. 20:3, cit. 1). Leaning wholeheartedly on God in the wilderness was one thing, but Moses was concerned about the Hebrews' response to the bounty of the Promised Land. The temptation to lose sight of God as the only power, to be drawn to other gods, and to ascribe success to one's own abilities would increase (see Deut. 8:12–17, cit. 7). In this second section Moses could be speaking to a contemporary audience—confronted as we are with the comforts of modern life and material influences. 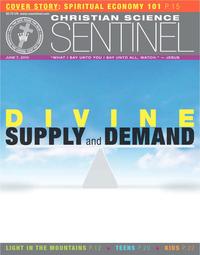