FORGIVENESS: THE KEY TO PEACE

FICTION DOESN'T OFTEN APPEAR in this column, but The Galilean Secret warrants inclusion, we felt, because its writing was motivated by a very real desire on Evan Drake Howard's part to bring peace to the Middle East. The book's roots are in a vivid experience he had when he was with his son's sixth-grade class during a visit to Ground Zero in 2006. As he thought about "the monstrous evil that had been visited on Ground Zero, and how violence is humanity's most virulent disease," he wanted to do something to bring out Jesus' love for humanity.

Howard says, "I wrote the novel out of my belief that Jesus Christ fully actualized divine love." He believes that love and forgiveness have power, and he wanted to explore how such qualities of thought could lead to a positive result, even in the face of great violence and fear. 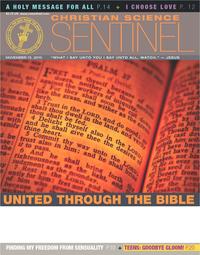