PEOPLE AROUND THE GLOBE are struggling to buy or sell homes. In January Reuters news service reported that the value of transactions in German real estate was expected to drop in 2009 by as much as 23 percent from 2008 ("Distressed property sales seen in Germany—survey," Reuters.com, January 14, 2009). And the BBC subsequently reported property sales in the United Kingdom hitting a new low, to half the level seen a year ago ("House price decline accelerates," news.bbc.co.uk, March 3, 2009).

Often "for sale" signs can sit in yards for months on end. Many urgently needing to sell have discovered their homes' values have sunk below the equity they have in them; still others find that they no longer qualify for the financing to purchase a new home. Headlines have continued to suggest that for would-be sellers, the bad news keeps coming.

Maryl Walters lives in St. Louis, Missouri, where she is a Christian Science practitioner and teacher. 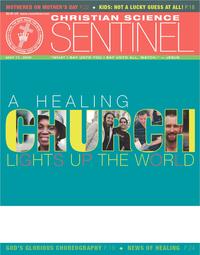