HEAD IN THE SAND?

I CAN REMEMBER one of my early encounters involving the exchange of religious beliefs. Really early, like grade school. My friend had picked up the view that Christian Scientists were a little like the ostrich who hides its head in the sand to avoid problems. I explained why this was a little puzzling to me. After all, I had seen consistent evidence that prayer was an effective way to face problems squarely and intelligently. But the fact that I dealt with issues differently caused others to assume I wasn't doing anything.

As years passed, I realized that I did tend not to dwell on material discords, physical injuries, or personality problems quite the way my peers did. And such a different emphasis probably looked to others as if I was ignoring issues. This came to mind when I learned of a Christian Scientist who'd badly injured herself. She quickly wrapped her hand so she wouldn't have a graphic picture of the damage. Ah, the ostrich stereotype, I thought. Most people would probably think it strange, even naïve, to look away from such an injury. 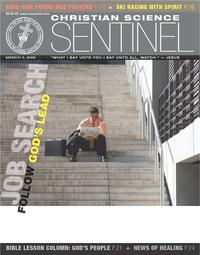