THE MASTERS AND TRUE MASTERY

THE AUGUSTA NATIONAL Golf Club, Georgia—where the first major championship of the season, The Masters, starts April 9—is rich in golfing folklore. The three bridges on the course bear illustrious names: the Sarazen, the Nelson, and the Hogan. And spectators speak in hushed tones of the accomplishments of golfing legends such as Palmer, Nicklaus, and Player, and, in recent years, Tiger Woods. Woods already holds three records: the youngest winner (21), the lowest 72-hole score (270), and the widest winning margin (12 strokes).

This year's Masters will be particularly significant for Woods and for his fellow competitors, as it will mark his first appearance in major competitive play since the US Open in June of last year, when he won in a dramatic playoff with Rocco Mediate, despite an injured leg.

Brian Kissock is a former golf professional who has played the Augusta National course more than once. He is now a Christian Science practitioner in California. 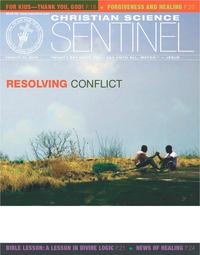