My job involves working full time at a computer. In late 2004, I began to notice that my eyes were feeling sore toward the end of the workday. At around the same time, I had a routine physical checkup that was required by my employer. The nurse who tested my eyes told me that my vision was quite good in one eye but poor in the other. I remember not even being able to identify the largest size letter on the optician's chart with that weaker eye. She gave me a prescription for new glasses, which I began wearing at work. I didn't need them for any other purpose at the time. However, some months later, I noticed there was discomfort when I was reading a book or magazine, so I then started wearing my glasses for this, too.

In October 2006, I went on holiday to New York City and took my glasses with me reading as needed. I'd been praying on and off to try to resolve this issue with my sight, but it was only during this holiday that I really endeavoured to take a strong spiritual stand for permanent healing. 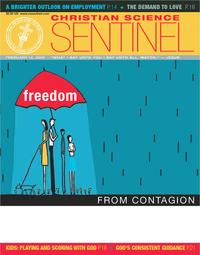