TRUTH AND LOGIC AT WORK IN MOSCOW

THE INFORMAL TALKS held last month by the Russian and American presidents in Kennebunkport, Maine, to try to sort out some of the divisive issues between the two countries, reminded me of times I have spent negotiating business deals with Russian officials. For me, the real satisfaction lay in the support I felt from daily prayer and the resulting evidence of the divine Mind at work in our meetings.

Fifteen years ago, while living in Moscow, I set out to start a telecom company that would depend on a space satellite for connection to the international networks. I was prepared to engage in high-level negotiations with Russian government officials. Earlier, I had talked in the United States with Russian representatives of a prominent technical institution connected with the space industry. I had no reason to think things wouldn't work out as planned. 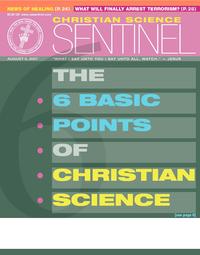