In 2001, a co-worker suggested that I should run a marathon. At first, I wasn't interested in doing that, but I did start running again. I had been a runner in high school, but now completing a 1½-mile loop in my neighborhood was all I could do. Slowly, however, I extended my mileage and began to run some local races. As my distances increased, I especially appreciated the opportunity the long runs and races gave me to pray about work, as well as for my family and the world.

Earlier this year, I injured a muscle in my calf, so that I was unable to run at all because of the pain. Over the past few years, I'd had healings of joint-pain and pulled muscles, and I was confident that this injury could also be healed spiritually through Christian Science. I prayed consistently, and also called a Christian Science practitioner, who lovingly supported me through prayer-based treatment. 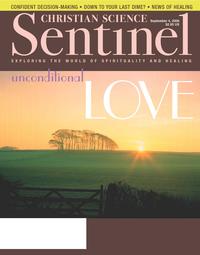