FREED FROM HEMORRHOIDS AND BURNS

One of my healings was of hemorrhoids. For three years they had bothered me greatly. There were moments when the pain and the burning were almost unbearable. During one of these crises, I had an inspiring thought: "Hold firm to God, who is Truth. He helps you." That's what I did. I lifted my thought to the Father-Mother, God. I acknowledged that God is supreme and infinite, and that I, as His reflection, could not feel pain or express anything that was unlike Him. I felt immediate relief, and, after three days, I was completely healed. I never again had a crisis, and the symptoms of the hemmorhoids disappeard completely. 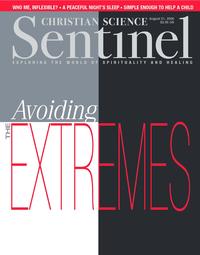