"I WAS INTRIGUED by the juxtaposition of two March 31 stories [in the Miami Herald]: 'In study, prayer made no difference for the ill,' and 'Mine survivor back home after "astonishing" recovery.' They appeared to carry contradictory messages. In the first, a study said that the prayers of strangers have no benefit. In the second, Randal McCloy, the rescued miner, thanks those who prayed for him and attributes his healing to 'God, mostly.' He says that, 'Because of Him I am here.' In her book Science and Health with Key to the Scriptures, Mary Baker Eddy wrote that, 'The world must grow to the spiritual understanding of prayer' [p. 10]. McCloy's gratitude to his supporters across the nation reveals a keener perception of prayer than do the results of the $2.4 million study. Hopefully, it will eventually be realized that material methods cannot measure a spiritual phenomenon." 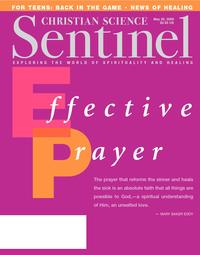