A message from The Writings of Mary Baker Eddy

For the past year, The Christian Science Board of Directors, as Publisher of Mary Baker Eddy's writings, has been considering the pivotal role of the Christian Science pastor—the Bible and Science and Health with Key to the Scriptures—as well as the Manual of The Mother Church, Prose Works, Poems, and Christ and Christmas, and what can be done to make them more available to those most ready to value and use them. So, over the next couple of years, beginning with the Bible and Science and Health, these writings will take new forms that serve both new and longtime audiences. The new Study Edition Bible and Science and Health in English (hardcover) will be followed this summer by a new paperback designed for sharing, and this Christmas with a premium leather set of books. In addition, we expect to offer hardcover editions of Mrs. Eddy's other writings listed above.

The new Bible and Science and Health, which began to arrive in Christian Science Reading Rooms in March, were developed in response to repeated requests over several years from Christian Science Sunday Schools. Their design grew out of ideas shared by Sunday School students, Christian Science teachers and practitioners, and Reading Rooms librarians, as well as book designers, typographers, publishers, and printers. They said they wanted the books to "feel good in your hand," lie flat when opened, be "textbooks" that work with metal markers, respect the content but have a contemporary look, feature the Cross and Crown seal on the front cover, convey a sense of calm, and yet be surprising and inviting. And almost everyone wanted them in blue! 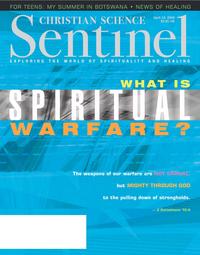