a LIFE made NEW

I HAD MARRIED VERY YOUNG, AND HAD MANY CHALLENGES. ALL MY CHILDREN had health problems. I had had a couple of operations for suspected cancer. This list went on and on and on. Everything was a big old mess. And I was mad at God—I didn't think He was doing a very good job with my life.

At that time I was a musician and played the organ. I was taking lessons from a man from New York City. Although he was not a Christian Scientist, he saw some of the difficulties that I was having, and told me, "You know, you really should look into Christian Science." He said there were a couple of books that would help me. He told me about Science and Health with Key to the Scriptures by Mary Baker Eddy, and particularly recommended two others she wrote, No and Yes and Retrospection and Introspection. 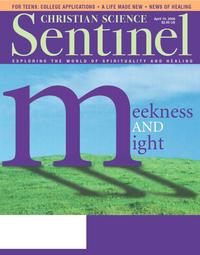