In 1985 my marriage ended, and that was a huge shock to me. I found myself overwhelmed with feelings of failure and worthlessness, and it was very troubling. I had this sense of having lost contact with God, not knowing what was right to do in God's eyes. And at the same time I felt this agonizing loneliness, just wanting human companionship, and particularly female companionship. It was an aching loneliness, day after day.

I had been a serious student of the Bible and the writings of Mary Baker Eddy for years. But now I really plunged into them with such a direct urgency. I was like a drowning man. I was reaching out in prayer to grasp something that would save me. 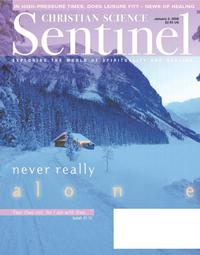