SHARKS AND OUR SHARED HABITAT

ON THE 30TH anniversary of the release of Steven Spielberg's movie thriller Jaws, shark attacks on swimmers and fishermen are in the news. What a coincidence! Or is it?

A few nights ago, I watched a television interview with a marine biologist who had been asked to comment on a series of shark attacks off the coast of Florida. He declared that sharks don't want to eat people. While it is possible sharks might mistake a swimmer for a seal — which they certainly do want to eat — it's more likely sharks intend attacks on people as a warning. It's territorial, he said; sharks just want people to stay off their property!

Elaine Follis is a contributing editor. She is Todd Professor of Religious Studies at Principia College in Elsah, lllinois. 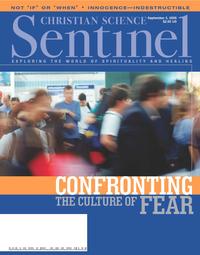