One day this spring, I was thinking with joy about the expected arrival of my new grandchild, when I received a call on my mobile from my husband with the news that our son and his wife had been told that the baby was in breech position and the placenta was blocking the birth canal. They had been instructed to check into the hospital the following morning for a Caesarean delivery.

I was just leaving a friend's home in the country, and as I drove home looking at a beautiful sky, I had a deep feeling of God's presence. I then heard the Christly message as if it were being spoken to me, "Render to Caesar the things that are Caesar's, and to God the things that are God's." I realized that the words of Jesus from the Bible (Mark 12:17) were clearly an angel message instructing me on how I should pray, or think rightly, about the situation that had been presented to my thought. I suddenly saw the relevance of the word "Caesar" to "Caesarean"—the term for the procedure thought to have been used at the birth of Julius Caesar or one of his family. My prayer centered on the spiritual fact that God's ideas, or children, have nothing to do with the mortal view of life as beginning with birth and ending in death. His children are spiritual, and God's idea of His child is forever complete and at one with Him. 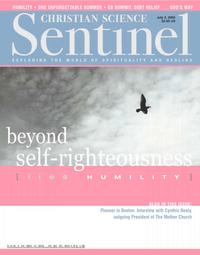