IN PRAISE OF HEALING

IF YOU'RE a back-to-front-magazine reader, you've probably already dipped into this week's "News of healing" section. It's a popular part of the magazine. Maybe because these personal testimonials go straight to the heart of what the Sentinel is about: giving evidence of God's healing power in human lives. Considering their popularity, and the centrality of these accounts to the magazine's mission, we thought you might like to know a little more about them.

Has the Sentinel always published testimonials? Since issue Number 1 in 1898. Our monthly sister magazine, The Christian Science Journal, also has published testimonies since its launch in 1883. In a section of the Church of Christ, Scientist's, governing document entitled "Testimonials," Sentinel founder Mary Baker Eddy wrote: "Testimony in regard to the healing of the sick is highly important. More than a mere rehearsal of blessings, it scales the pinnacle of praise and illustrates the demonstration of Christ, 'who healeth all thy diseases' (Psalm 103:3)" (Church Manual, p. 47). 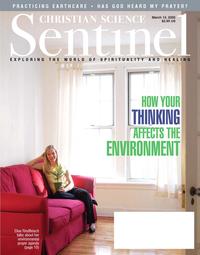