IT WAS SOMETHING LIKE LANDING IN THE eye of a storm. When Scott Baldauf arrived in Baghdad last August, Iraq was in a state of uneasy calm. United States military forces were pausing between operations. "People were waiting for the next big thing," Baldauf says in a telephone conversation, "not even necessarily sure whether the next thing would be big."

His assignment: a short-term rotation into Iraq for The Christian Science Monitor from his home in India, where Baldauf is based as the Monitor's South Asia correspondent. Preparation is everything when you're heading to a country in turmoil. "You just have to be ready to respond to whatever's coming," Baldauf explains. For this correspondent, that probably meant making sure to pack the body armor and extra satellite phone batteries. But it also meant preparing mentally and spiritually for the knowns and unknowns of life in a war zone. 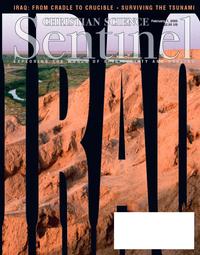