THE BEGINNING OF A NEW BEGINNING

Since Hurricane Katrina struck the Gulf Coast of the United States on August 29, millions have been struggling to come to terms with the loss of life and damage the storm caused—and to find ways to move forward. As efforts get underway at rebuilding lives and homes, businesses and infrastructures, a prayerful grasp of divine power and sustenance will be of inestimable value. The following article began as a conversation on Sentinel Radio.

The Bible gives so many accounts of people who were desperate in one way or another. People who turned to God and, without fail, received God's help. People who were sick, or dying, or in prison, or in exile, in slavery, who'd lost all their loved ones. Maybe they thought they were all alone in their grief, but then they discovered that they weren't. God, with all His love, was with them. He'd never left them. 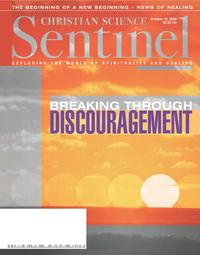