The vengeful and primitive justice being meted out in several Middle Eastern countries, involving videotaped executions, brings to mind something the English Renaissance philosopher Francis Bacon wrote early in the 17th century: "Revenge is a kind of wild justice, which the more man's nature runs to, the more ought law to weed it out."

Fast forward to 21st-century Kalamazoo, Michigan, where I live, and where the headquarters of the International Centre for Healing and the Law—a fledgling organization underwritten by the respected Fetzer Institute—is gaining worldwide attention. And for good reason, it seems to me.

Maude Sutherland Harned is a Christian Science practitioner who lives in Kalamzoo, Michigan. 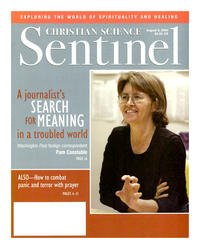