When my son, Stephen, was a young child, his feet were so flat that it affected his ability to walk and run normally. Because I was a Christian Scientist and my husband was not, when we married we had agreed that if such a situation arose, if he wished, we would take our children to a doctor. In this case, we made an appointment with a doctor who referred us to an orthopedic surgeon. The surgeon said our son's feet were unusually flat and prescribed the use of orthopedic shoes, but he offered little encouragement that the shoes would actually correct the condition.

We purchased the shoes, but they were so cumbersome that we discontinued using them after a short time. I saw this as an opportunity to turn to Christian Science and its prayer-based approach to healing. I recalled that Mary Baker Eddy's explanation of the spiritual meaning of Church included the word structure. The passage describes Church as "the structure of Truth and Love; whatever rests upon and proceeds from divine Principle" (Science and Health with Key to the Scriptures, p. 583). 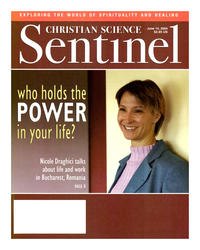