HE SAYS SHE SAYS

He says the first date was when she asked to go for a ride on his motorscooter. (Motorscooters were cool before motorcycles became popular.) She says the first date was when he asked her to go for the ride. The issue has never really been resolved. But decades ago this junior high school escapade (that ran out of gas literally, but not figuratively) was the beginning of a romance that led to marriage after college, and now a long record of moving forward together.

What has helped hold this marriage together for so long? We tell people that any couple who can survive filling out their income tax returns together year after year—and keep talking through that ordeal—this points to ingredients that make a marriage last. Some may say it's more a matter of chemistry. But we are sure the answer lies in respect, willingness to compromise and communicate, the expression of both human and spiritual love and affection, patience, humility, forgiveness. The list is much like what society typically may say makes a marriage manageable. 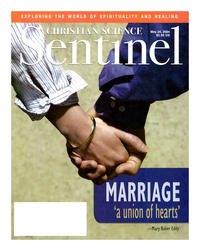