My prayer was 'doing something'

Some time ago, a rash broke out on both of my hands. The condition, which involved troubling secretions, was not only uncomfortable and unsightly, but also interfered with some of my normal functioning at home and at work. The first time this occurred, my husband, who was not a Christian Scientist, insisted that I see a physician, out of tender concern for my well-being. The condition was diagnosed as dermatitis.

I did not return to the doctor, but called a Christian Science practitioner to work with me for healing through prayer. At the time, I was employed as clerical worker for a lumber company, and my job entailed typing and working with a calculator, among other duties. While it was impossible to conceal the condition, I nevertheless continued at my job and performed these tasks with as little interruption as possible. 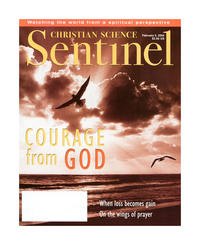