Eugene Richardson was born on the Ojibwe reservation near Leech Lake, in Minnesota. Wild rice grows in that region, and Richardson remembers gathering, parching, and husking the rice. His mother died when he was three. At the age of four, he was sent to the Pipestone Indian School, where he remained until he was in the seventh grade. His path from that time to the present has been an extraordinary spiritual journey.

I started drinking when I was about ten. There were older boys in the Pipestone School who worked in the bakery, and they drank lemon extract because it had alcohol in it. We younger boys looked up to them as friends, and we started drinking, too. That's how I got started.

Eugene Richardson has been free for 27 years from addiction to alcohol. The physical illnesses and disabilities mentioned in his account disappeared along with the alcohol addiction. He sees members of his family occasionally, and one granddaughter keeps in frequent touch. He has found financial independence, a church home, and has had instruction in Christian Science healing. 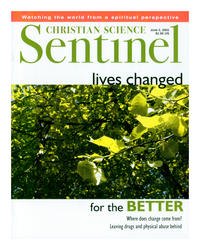