ONE DAY a friend of mine found himself exposed to considerable danger from which he was unable to withdraw. He was a prisoner of war. In preparation for an expected bombing raid, his captors forced him and the other prisoners to stand near some military equipment that was thought to be a target for the raid. The prisoners were being positioned as human shields to protect the equipment. They had nowhere to hide, and were left completely exposed.

As the bombs started to fall, my friend stood still. He turned to God and prayed, "Clad in the panoply of Love, human hatred cannot reach you" (Science and Health, p. 571). Soon other prisoners began to gather around him, perhaps nine or ten men. For about 15 minutes they stood huddled closely together around my friend as bombs landed all around. When it was over, none of them was hurt. 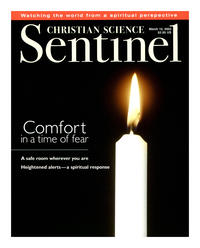