It's common to all humanity. A man, a woman, or a child looks up at the stars and feels an unexplainable exaltation. Feet may be on terra firma, but thought soars above the gravitational pull of earth to new heights—higher hopes, nobler aspirations, and new goals—all promising an improved life. Confidence wells up that what we hope to accomplish is not only possible but can be safely achieved. We return to our lives refreshed and ready to go forward.

So, when the space shuttle Columbia came crashing down to earth February 1, for people everywhere the crushing news felt very close to home. Somehow the astronauts' lofty missions are like stars to our hopes—hopes that momentarily came crashing down with the shuttle and its crew. But soon, new thoughts began to shine through, such as those expressed by Mary Williams, a worker at NASA who had daily contact with the astronauts: "We might slow down for a moment, but we're not going to stop. I mean, we're up there trying to better humanity" (The Christian Science Monitor, February 4, 2003, "At NASA hub, grief and comfort").

Barbara Vining is a contributing editor.

Send a comment to the editors
NEXT IN THIS ISSUE
Article
Columbia: What is not gone 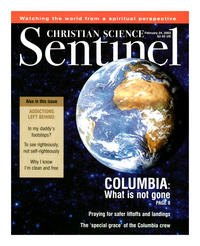