WHEN I WAS IN THE FIRST GRADE, I was in my first and only fight. I was provoked by another boy in class, and I reacted with quite a bit of anger. But after it was all over, I knew something about what I had done wasn't right, even though I felt I had just met my first arch nemesis.

Later in the day, at soccer practice, I had to run a drill down the field with this same boy. This time I had the feeling that if I could forgive what he had done to provoke me, I would feel much better. With some fear that what I was about to do was stupid, I told him that I would rather be friends than enemies. Instantly my fear melted. My enemy agreed with my hopes. And we became allies. 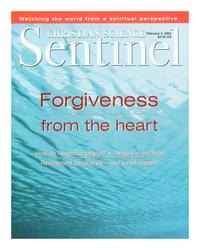