In this passage from her book Science and Health, Mary Baker Eddy wrote about the limitless possibilities available to anyone who applies the universal laws of God to their individual lives: "... business men and cultured scholars have found that Christian Science enhances their endurance and mental powers, enlarges their perception of character, gives them acuteness and comprehensiveness and an ability to exceed their ordinary capacity" (p. 128).

Her own remarkable work life stands as an example of how one person can overcome limitation and "exceed their ordinary capacity." After the age of 60, when many women of her age and station were reclining on daybeds, Mary Baker Eddy gave numerous public sermons; continued her healing ministry; served as president and taught in her own metaphysical college (chartered by the Commonwealth of Massachusetts); was ordained pastor of her church; founded, wrote for, and edited three magazines; disbanded and reorganized her church; built a church edifice; became her church's Pastor Emeritus; published a collection of her miscellaneous writings from 1883–1896; established a Board of Lectureship to deliver addresses on Christian Science to the public; established a publishing house and Reading Rooms where the public could read and purchase her books and magazines; established a church government and wrote its bylaws; defended herself in several lawsuits, as well as from attacks from clergy and press; wrote two autobiographies; moved 12 times; founded a newspaper that has won (to date) seven Pulitzer Prizes; and revised and published numerous editions of Science and Health. 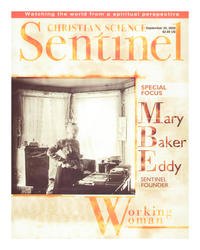