A few years ago I made an appointment with an optometrist for an eye examination, in order to get a new pair of glasses. After examining my eyes, the eye doctor told me that I had glaucoma, which, he said, was due to high blood pressure in the eyes.

He gave me a prescription for eyedrops and said I would have to use this medicine from then on because, according to him, glaucoma is incurable. He added that if I didn't follow the treatment he prescribed, I would become blind, although at that time my vision had not deteriorated. For a while I used the medication. 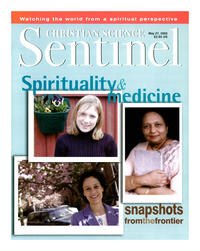