The power of a mother's love to correct injustice

David Milgaard was 17 in 1970, the year he was convicted of a rape-murder he did not commit. During her son's 23-year prison ordeal, Joyce Milgaard went from being a quiet, self and family centered mother of four, to a fearless battler for justice. Ten years ago last month, David was released from prison when his mother's investigative crusade finally produced incontrovertible proof of his innocence. In 1999, the Canadian provincial and federal governments announced an unprecedented wrongful imprisonment award to David Milgaard. By then, after nearly three decades invested in their struggle, Joyce Milgaard already had taken on the larger challenge of working to reform a country's criminal justice system.

In 1993, Joyce joined forces with a support group for another wrongfully imprisoned Canadian, Guy Paul Morin (at the request of Morin's mother—"How could I turn a mother down?"), and helped form the Association in Defense of the Wrongly Convicted. AIDWYC (www.aidwyc.org) is currently at work on 41 wrongful-conviction cases. If there is a rightful use of the word crusade today, Joyce Milgaard's mission was and is a crusade to right grievous wrongs through her certainty of God's care—and persistent, inspired, tireless work.

Send a comment to the editors
NEXT IN THIS ISSUE
Article
DIANA MCINTOSH TALKS ABOUT THROUGH THE VALLEY: MILGAARD, A SYMPHONIC WORK FOR ORCHESTRA, PIANO, AND SPOKEN VOICE 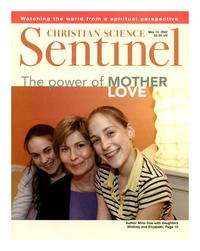