During World War I, my dad became interested in Christian Science. When he returned to civilian life and married, he continued his interest. But he ran into one stone wall: My mother would never let him bring any Christian Science literature into our home.

When I was 11 or 12, because of an ear condition that caused me to miss a lot of school, my parents put me into a hospital. At length, the doctor told my parents they had done all they could and didn't expect me to live more than six hours. It was then my dad asked Mother if they could try to heal me through Christian Science treatment. In later years my mother told me that she didn't know what that meant, but that she agreed anyway.

Send a comment to the editors
NEXT IN THIS ISSUE
Testimony of Healing
Growing, spiritually 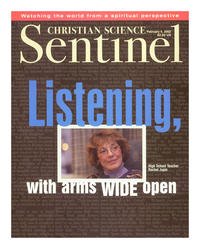