At the time I wasn't too upset because he'd always been an honest child and because I'd had time to pray before facing him. This prayer brought the assurance that no matter what had happened, there could be lessons learned and something good could come from the experience.

Send a comment to the editors
NEXT IN THIS ISSUE
Article
The Psalms: prayers of affirmation 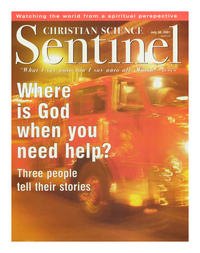