For 17 years, I was in what I now realize was a marriage full of emotional abuse—put-downs, name-calling, and hardship. My husband had serious drug problems. He ran up my credit-card balance to $10,000 at one time, and I had to struggle to pay it off. As a result, I spent a lot of time in poverty. Along the way, there were also threats and some physical violence.

One night, when my husband was high on drugs, we got into an argument. He became angry at my dog because the dog was defending me. He grabbed a heavy glass ashtray and broke it to make a sharp weapon with which to stab the dog. But instead of getting the dog, he stabbed my hand. 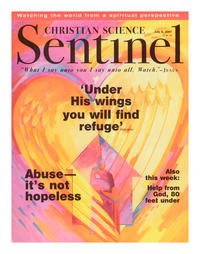