Two Young Men are faced with life-changing decisions. One, a young 32-year-old deputy counsel to President Nixon, makes a choice that will contribute to the downfall of a President. Another, a young college graduate starting his career, decides on a course of action that will impact his future and that of his company.

Though you could say the magnitude of these two choices was not on the same scale, each would influence the future of the one who made it. Thirty years later, each can help us learn about integrity. 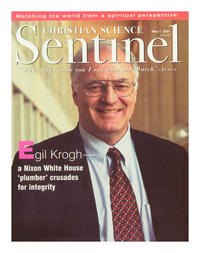