After the earthquake . . . signs of hope

As This Week's Sentinel goes to press, signs of encouragement and new hope are surfacing in India—even as a massive recovery from the 7.7 magnitude earthquake of January 26 continues. Supplies have been pouring in from the international community, including the US, which dispatched seven cargo planes of relief and personnel to the western state of Gujarat, where the quake occurred.

Among these donations from around the world, perhaps the most remarkable have come from India's longtime enemy, Pakistan, with whom she has fought three wars since 1947. As a result, for the first time since 1999, the leaders of the two countries have reportedly spoken on the phone. Pakistan's military ruler, General Pervez Musharrat, called Prime Minister Atel Bihari Vajpayee of India to express "his sympathy at the great loss of life caused by the earthquake." And Prime Minister Vajpayee thanked General Musharrat for the two planeloads of relief sent to Gujarat. 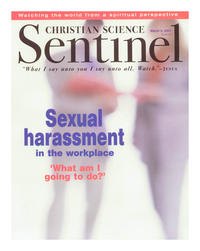