In the heat of the day, an angel spoke to Hagar.This woman and her son had been cast out from their home.Their everyday lives were changed forever.What they knew as a place of security was gone.Here they were in the desert of the unknown.The angel of God spoke to Hagar.He spoke this loving command—to her."Fear not."

Moses was an educated man. He lived well. He knew where his security lay.One day he had to run—his life was in danger.The life he had lived was over. He hid. A new life was before him.A gentle shepherd he became.In this new profession—far from the life he had known—Moses heard a voice that gave him this command."Fear ye not." 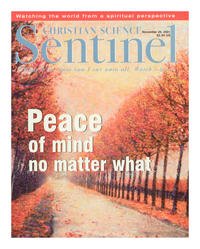