Just how far will we go in becoming a mechanized society? Will we ourselves eventually become "mechanized"—robots, in effect? Consider these four bits of information found on the Internet the other day: • Several international companies are thinking about implanting microchips in their employees to better measure where, when, and how employees spend their time on the job. • Biochip implants, monitored by satellites, could track an individual's whereabouts and serve to locate people lost in the wilderness. • A science journal has reported that a microchip technique has been developed to influence a person's brain– cell activity and talk directly to the brain's neurons.

Experts say it's inevitable that technology will assist humankind in marvelous new ways in the near future. And this is cause for gratitude. But some are asking urgently, Will we, at some point in the not-so-distant future, wake up to discover that we have become part human, part machine—controlled primarily by biochip implants and electrochemical activity in the brain? 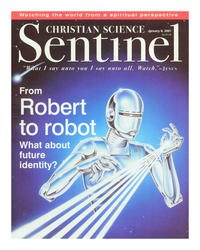