For over thirty years, I suffered periodically from swollen ankles. Even after becoming a student of Christian Science, I did not try to heal this problem through prayer or deal with it effectively. I considered it to be poor circulation and found that walking daily, playing sports, and taking regular exercise, all of which I enjoyed, relieved the problem. They didn't cure it, however.

By this time, I had moved to the midwestern United States, where the summers were much hotter. The problem became acute again. One morning, I read this statement in Mary Baker Eddy's book Science and Health with Key to the Scriptures: "When understanding changes the standpoints of life and intelligence from a material to a spiritual basis, we shall gain the reality of Life, the control of Soul over sense, and we shall perceive Christianity, or Truth, in its divine Principle" (p. 322). I stopped. This statement didn't half stir me up! It was a promise of healing. Which was my standpoint? Was I understanding who I really was? Was I seeing myself as living on a spiritual basis—as the image and likeness of God, living in a universe of Spirit, where Spirit, God, is supreme and all-presence, as I had learned from my study of Christian Science? 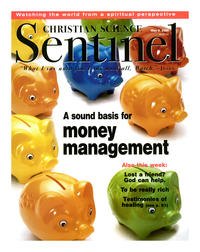