Thirty-three years ago I was beset by so many domestic and financial problems that I seriously contemplated suicide as a way out of my difficulties. Something told me to see a lawyer before taking such a drastic step, and the lawyer suggested I talk to a minister whom he knew. After the meeting with the kindly minister, I then wanted to see a Christian Science practitioner, and from that moment, I earnestly studied Christian Science and attended every Sunday church service and Wednesday testimony meeting. However, I was a chain-smoker of cigarillos, and it seemed impossible to overcome the habit. I wanted to become a member of the Church of Christ, Scientist, I was attending, and ultimately to take class instruction in Christian Science to learn more, but smoking interfered with those desires. Nonetheless, my study of Christian Science went forward.

Several days later at my office, I earnestly turned to God in prayer. In fact, it was the Lord's Prayer with its spiritual interpretation found in Science and Health that came to thought. I also found a testimony that was very helpful, reprinted from an old Sentinel. It was by a woman who had been a confirmed drunkard and smoker for nearly twenty years and had lost all of her possessions. She was then transformed by feeling God's love and care for her. After reading this, a wonderful feeling came over me that I had never before experienced, and I said out loud to God, "God, what is it?" Then a voice clearly said to me: "Harry, you are not smoking anymore!" 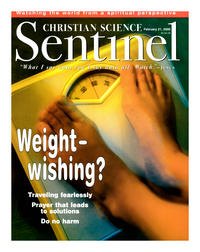