When my twin sons were about two years old, they both became quite fretful and ill. I was praying steadfastly, and had called a Christian Science practitioner to treat them through prayer, as well. After about a week, the boys were no better, and the physical condition had become quite alarming. One of the boys had a lump under his ear, and one side of the other boy's head was swollen.

My husband was not a Christian Scientist, and a doctor was called.

Send a comment to the editors
NEXT IN THIS ISSUE
Testimony of Healing
Employment found; burned hand healed 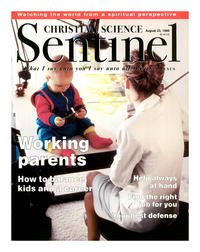