In 1997, I was out walking in a small European city. Two hours later I woke in the local hospital, wondering how I got there. They told me I had passed out and hit my head. Someone had called the ambulance, and I had been brought into the hospital. At that time I felt perfectly confident that all was well—and it was. There were no injuries from the fall, only a tender spot on my head, which soon healed.

However, a fear began to grow, and I began to have many questions about the incident. What had caused it? What was wrong with me? When I returned to my hotel the next day, I called a Christian Science practitioner. He assured me that fear had no place in my thought because I was the beloved child of God, always within His protecting power. He referred me to the passage in Science and Health that reads, "When the illusion of sickness or sin tempts you, cling steadfastly to God and His idea. Allow nothing but His likeness to abide in your thought" (p. 495). It required some diligent prayer and courage to go out alone, but in about three weeks the fear receded. I was able to go out alone, confidently and with joy. About ten days after the initial fall, however, I began to experience intermittent double vision. Again, I contacted the practitioner, and he reassured me that all was well. He suggested that I apply myself to knowing, understanding, and feeling my oneness with God. The double vision disappeared shortly thereafter. 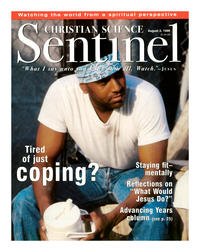